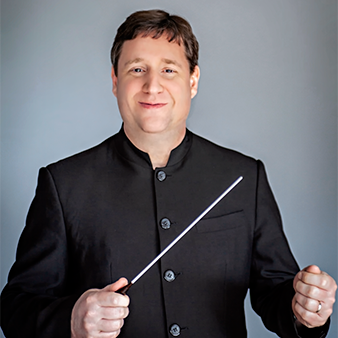 Appointed in July 2015 as the third conductor in the 25-plus-year history of Little Rock Winds, Music Director and Conductor Israel Getzov has won wide acclaim for his ability to evoke expressive and enthusiastic performances from his musicians.

He is in demand as conductor in the United States, as well as in China. He serves as Music Director of the Conway Symphony Orchestra, and previously held the position of Associate Conductor of the Arkansas Symphony and Principal Conductor of the Tianjin Philharmonic, the resident orchestra of the Tianjin Grand Theater.  He has conducted orchestras throughout the United States and abroad including Abilene Philharmonic, Asheville Symphony, Cleveland Pops, Monroe Symphony, Skokie Valley Symphony, Shanghai Philharmonic, Symphony of the Mountains, Tianjin Symphony, Zhejiang Symphony Orchestra, Bolivia Classica, University of Taipei Symphony, and the Encuentro Jovenes Musicos Festival in La Paz, Bolivia.  As an opera conductor, he led the world premiere of The Scarlett Letter by American composer Lori Laitman, conducted works of Giancarlo Menotti at the Shanghai Oriental Arts Center and the Cleveland Institute of Music, and worked as Staff Conductor for Tianjin Grand Opera in productions of La Traviata, Il Trovatore, Rigoletto, Bluebeard’s Castle, and Oedipus Rex.  Mr. Getzov was selected by Leonard Slatkin to conduct the National Symphony Orchestra at the Kennedy Center in Washington, D.C. and was chosen by David Zinman for the American Academy of Conducting at the Aspen Music Festival.

As the Associate Conductor of the Arkansas Symphony from 2001-2008, Getzov led classical subscription, pops, and education concerts as well as numerous outreach concerts around the state.

Getzov also hosted his own weekly radio program called “Izzy Investigates” on KLRE Classical 90.5 in Little Rock, and has performed live as a chamber musician on WFMT and WBEZ in Chicago.

Raised in Chicago, Mr. Getzov’s musical studies began with the violin at age three, and later studied viola, piano, and percussion, which he played in his schools’ wind ensembles and jazz bands. At sixteen he earned a position in the violin section of the Civic Orchestra of Chicago.  He has performed as violinist with many renowned conductors including Barenboim, Boulez, Solti, Mehta, Jansons, Spano, and Rostropovich. He was a founding member of the Rockefeller String Quartet, a professional quartet with whom he gave over 200 concerts.  An in-demand educator of ensemble techniques, Mr. Getzov holds a tenured professorship at the University of Central Arkansas and has given clinics at many schools in the U.S. and internationally.